Posted on 29th November 2020 at 12:06
Former Y&DSCL Panel Umpire and Y&DCUSA President Bob Hesk (1933 - 2020) sadly passed away yesterday.
He was also noted for stints at his own cricket club, Thirsk, notably Secretary for a decade, groundsman for a number of decades, and also Chairman of Thirsk Athletic Sports & Social Club for a few years in the early 1990s. He was also involved in managing the U17s cricket team, and was Secretary when the club celebrated its 150th Anniversary in 2001.
Bob also went on to umpire in the top divisions of the Nidderdale & District Amateur Cricket League.
His efforts were recognised in 1999, when he won the much coveted Major Bell Trophy, for achievement and dedication.
In his later years, Bob had a stint at Thirsk Bowls Club as a playing member, and at one point took over the Secretaryship. 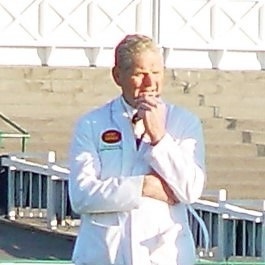