Posted on 26th July 2021 at 11:07
YPLN T20 Finals Day took place yesterday at York Cricket Club.
In the first match of the day, the U19 Final, hosts York won the toss and decided to bat first against Woodhouse Grange on a good looking pitch that would provide a total of 660 runs in just 78 overs thoughout the day. York recovered from the early loss of Alex Wood in the first over with a partnership of 51 in 33 deliveries between Finlay Bean and Matthew Roberts. Bean (42 from 25 deliveries) was then joined by Elias Smith (35 from 18) and the score progressed rapidly. A late cameo from Aiden Doeg (31 from 27) saw York to a daunting 170-6 in their allotted 20 overs. For Woodhouse, Ted Baty, Chris Wood and Harry Jackson each took 2 wickets, but some wayward bowling and the concession of 20 wides to the York total proved costly. Woodhouse started their innings well with Ted Baty and Rob Draper (26 from 29) and was pushed on when Chris Wood (34 from 29) joined Draper. When they both departed in the space of 3 balls in the 12th over, though, the innings stalled and, despite some lusty hitting from Harry Jackson (33 from 19) and Tom Kirby (18 from 9) the target proved too steep and the innings petered out on 159-8. For York, Matthew Roberts and Kieran Blake took early wickets, but three wickets, including that of Jackson, for 20 runs by Aiden Doeg kept the Woodhouse innings in check.
League Chairman, Graham Hursthouse, presented medals to the scorers and umpires (Matthew Harris and Phil Robshaw), the players and the Man of the Match, adjudicated by the umpires, Aiden Doeg before presenting York skipper Finlay Bean with the trophy. 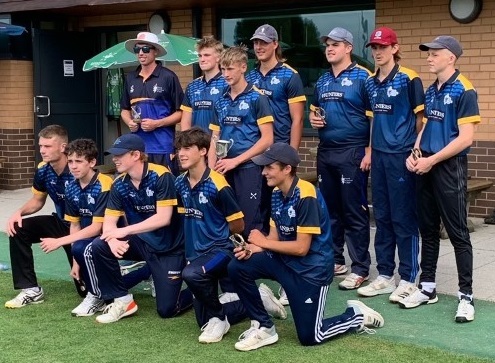 The second match was the ECB Premier League Final between York and Sheriff Hutton Bridge. SHB batted first and were given a steady start by openers Mark Fisher and Arthur Campion. The dismissal of Campion and overseas player Dulash Udayanga by York skipper Simon Lambert in successive deliveries was a blow and it took a good stand of 62 in 52 deliveries between Mark Fisher (35 from 26) and Tommy Hudson (48 from 35) to set ‘The Bridge’ up for a final onslaught from skipper Adam Fisher (47 from 25) and Freddie Collins (21 from 14). York’s most successful bowler was Lambert who ended up with 3-20 from his 4 overs as the innings closed at 165-5. Lambert opened the York innings with Charlie Elliot and the pair gave York a fast start, scoring 60 runs in the 6 over mandatory Power-Play. The easing of the fielding restrictions, allowing SHB to have more fielders outside the 30 yard circle and set more defensive fields did little to stall York’s progress and when Elliot (41 from 28) was out the pair had put on 134 from 84 deliveries and taken York to the brink of victory. The pace didn’t ease up with the arrival of Finlay Bean (18 from 14) who helped his skipper guide York to victory with 13 balls to spare. Fittingly, Lambert hit the winning run to end up with a glorious 101 not out from 65 deliveries.
Graham Hursthouse once again presented the medals and trophy and thanks go to scorers Alice Clews and Kevin Hutchinson and umpires Ian Robertshaw and Paul Roberts. The easiest decision that the umpires had to make all day was to adjudicate Simon Lambert as Man of the Match.
Thanks to everyone who turned up to enjoy some high class cricket and, in particular to York CC and their ground staff. Commiserations to the losers and congratulations to the winners.
Share this post: