Posted on 13th July 2022 at 21:03
The YPLN Finals stage of the ECB Vitality Club T20 Competition took place in glorious weather and in front of a large crowd on Sunday 10th July at Woodhouse Grange.
In the first semi-final, hosts Woodhouse Grange won the toss and, thanks to some big hitting by Fritz De Beer (31 from 16 balls), had reached 61-2 at the end of the 6 over Powerplay. Castleford then managed to slow the run rate down but Chris Bilton (40 from 46) held the innings together and, mainly due to some late heroics from Matthew Ainley (49 from 27) reached 160 all out. For Castleford, Callum Rowe took 3 – 15 from his 4 overs.
When Castleford batted no batter really got going and wickets fell at regular intervals. Several players got a start, Ed Morrison (18 from 12), Luke Edwards (17 from 17), Liam Hyde (14 from 24) but the Woodhouse spinners kept the scoring rate in check and they finished 96 all out. Chris Suddaby with 4 – 15 from his 4 overs was the pick of the bowlers.
Sheriff Hutton Bridge batted first in the second semi-final against league leaders Driffield and their innings was held together by Mark Fisher (74 from 60) and Dulash Udayanga (41 from 30), finally closing on 165 – 6. For Driffield the Drury brothers Alec and George took 2 wickets apiece.
Driffield’s innings was a stop-start affair, seemingly coasting to victory at one stage and then staring at defeat the next and it took a last ball boundary from Grant Halder to seal a hard-earned win. Major contributions came from, captain for the day, Nick Hardgrave (49 from 27) and Alec Drury (43 from 32) and for Sheriff Hutton Bridge, two wickets apiece for Ben Harrison and Ashley Watson.
Woodhouse Grange again won the toss and elected to bat in the Final and their innings followed a similar pattern to the semi-final with De Beer (67 from 42) setting a cracking pace. Bilton (41 from 39) again anchored the innings and it was Richard Walton (47 from 20) who provided the end of innings fireworks this time as the innings closed on 190 – 3. Nick Hardgrave was the pick of the Driffield bowlers, only conceding 21 runs from his 4 overs.
Hardgrave (42 from 21) led the way with the bat in Driffield’s innings and was well supported by Jack Oakley (39 from 32) but chasing such a large total was always going to be a tall order and the innings ended a little anticlimactically on 142 all out with the last 5 wickets falling for just 5 runs in the space of 6 minutes. Sam Britton (4 – 24) and Walton (3 – 21) were the pick of the Woodhouse bowlers.
League Chairman, Graham Hursthouse, presented medals to the umpires, Mike Linwood, Paul Roberts and Adam Seymour, scorers Rob Smith and Andrew Desmond, Man-of-the-Match, Fritz De Beer and the players from each team and the trophy to winning captain James Finch. Woodhouse now go on to host the Area Finals of the competition on August 7th and will welcome teams from NE Premier League, NYSD and Bradford League to Sandhill Lane.
Thanks go to all concerned, particularly the hard-working volunteers at Woodhouse Grange and everyone who turned out to watch an exciting day’s cricket. 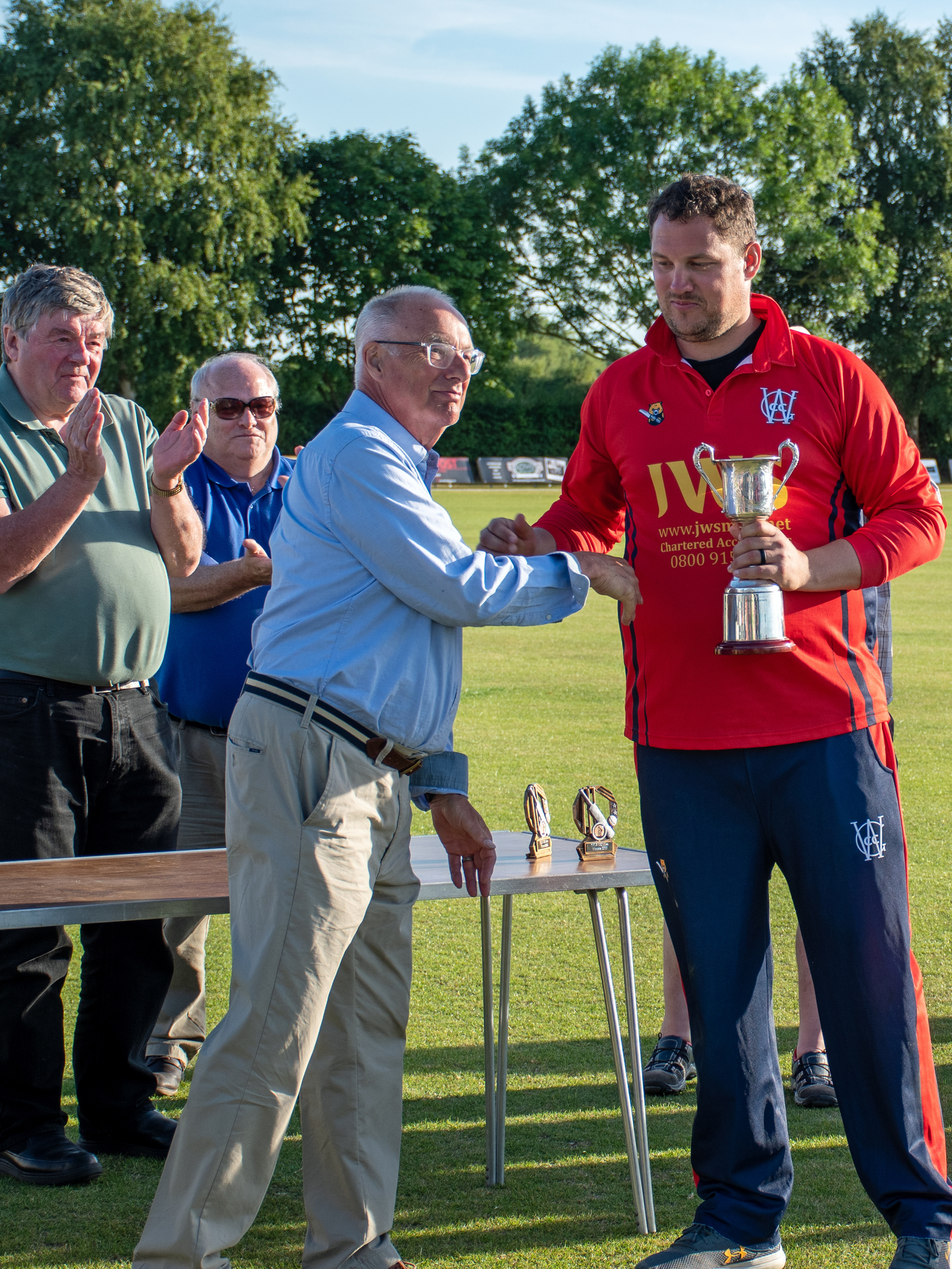 Photograph of winning captain James Finch being presented with the trophy courtesy of Andrew Desmond
Share this post: